We Are In A War For The Minds Of Our Children!

Whether you are conservative, liberal, or somewhere in between, when the final answer to 2+2 doesn’t equal 4 anymore, something has seriously gone wrong somewhere!

The information below, which I can’t take credit for writing, gives us a sneak preview into the new math curriculum the state of Oregon is rolling out which, truth be known, isn’t really about racism and white supremacy at all.

This is a convenient, indefensible, and covert smoke screen for the continued indoctrination of our children in many of our public schools blatantly working to rewrite history every way possible (the 1619 Project, etc.) and to control the minds of our youth with an undeniable communist agenda!

Coming To A School Near You?

The state of Oregon is encouraging teachers to take a course called “Dismantling Racism in Mathematics Instruction” in which teachers are encouraged to “come up with at least two answers” that might solve a math problem. 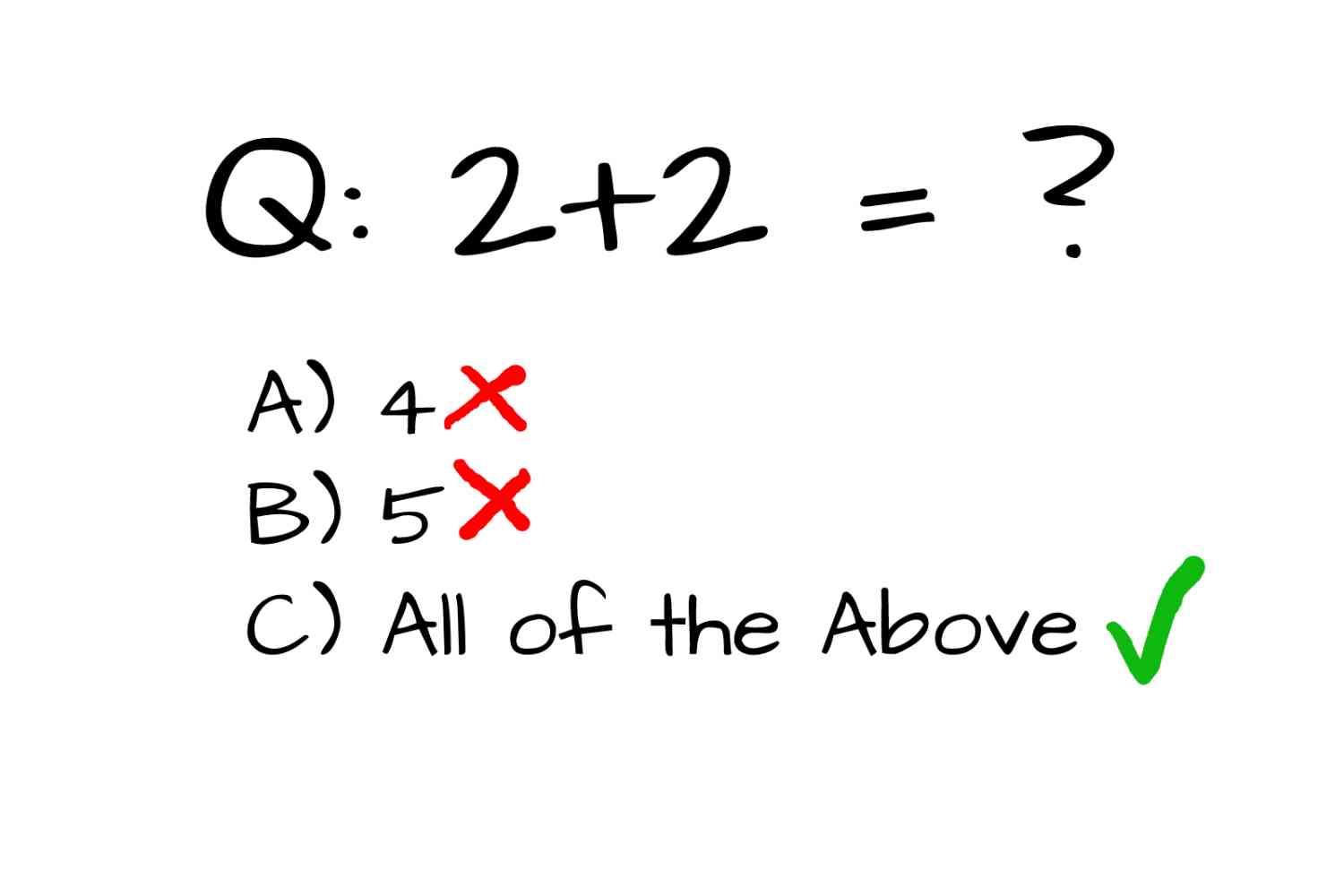 Making math explicitly racist, one student at a time:

Oregon’s Department of Education sent out an online pamphlet last week advertising a new course designed for teachers entitled, “A Pathway to Equitable Math Instruction,” with a section focused on removing racism from math.

This “micro-course” is being promoted to Oregon middle-school teachers as a way to “dismantle racism in mathematics instruction,” and “the toxic characteristics of white supremacy,” which may sound awful, and it is, and I’ll get to that in great detail in a moment, but there’s something else going on here that is getting lost in the hot takes and insta-outrage you typically see.

If you dig down into the course (it is available), you find something really interesting:

But for the first unit, or “Stride” as they put it, it’s not particularly objectionable.

There are five Strides in all. The latter four, “Stride 2: Fostering Deep Understanding,” “Stride 3: Creating Conditions to Thrive,” “Stride 4: Connecting Critical Intersections,” and “Stride 5: Sustaining Equitable Practice,” are, with the exception of the last one, pretty run-of-the-mill explanations of various teaching strategies as applied to the instruction of mathematics.

“The Aspen Institute Education & Society Program defines educational equity as every student having access to full and equal opportunity to succeed in life. To achieve this outcome, all students deserve access to the right resources, academic rigor, and rich opportunities to develop their agency and identity, all of which are essential to prepare for college and career—irrespective of their race, gender, sexual orientation, ethnicity, tribal status, language, nationality/immigration status, disability, family background, or family income.” —Aspen Institute

Well, that’s pretty refreshing. Yes, to all of that.

This unit dips its toe into wokism, but the references to “racism” (including “systemic racism,” “ethnicity,” and “supremacy,”) are confined to a couple of paragraphs in a discussion about people for whom English is not a native language.

In Stride 5, “Race” appears 10 times, mostly as self-assessments and bibliographical references, “racism” or “racist” 23 times, including “antiracist” 17 times, “ethnic” and its various derivatives just four times, mostly in a bibliography, and “white supremacy” 3 times, twice in the bibliography.

This Stride definitely ramps up the wokeness factor, and its references to Covid suggest it was written, or at least edited, in the past year or so.

It is also one of the more painful Strides to read purely for the language. They all make prodigious use of educator jargon, but this one really takes it up a notch with “positionality,” “intellective,” “dialogical,” and others.

To review, Strides 2 through 4 were fairly anodyne, mostly a recitation of basic teaching tools. And while Stride 5, which was written more recently, gets into “antiracist” thinking, it doesn’t quite dial up the insanity, not compared to Stride 1.

However, all five strides do have some pictures of individuals in them, and not a single one is a white male. One might be a white female, but it’s not clear.

As we’ve been seeing lately, when it comes to “anti-racism,” no whites need apply.

I get it was done to blacks and others in the past. That was wrong, but it’s always wrong to exclude people because of their immutable characteristics, and it’s still wrong. Calling it out is not racist. Doing it is racist.

On to Stride 1. This is the real problem, not just for the content, but for what it foretells. I’m guessing this was written much more recently. There’s an arms race going on, a race to see who can be the most woke, and Stride 1 was likely added to up the ante.

And I don’t think the competition is even close to being over, although it is hard to imagine it getting much more insane than this.

“Visibilizing,” in case you didn’t know (and why would you?) is:

To make visible something that was previously intangible or invisible to the naked eye.

Real racism is clear, it’s obvious, it’s identifiable. As a society we have rightly denounced it and decided to make its practice illegal in most public spheres, and so there are extensive laws on the books, various legal remedies available, and entire governmental departments and agencies dedicated to rooting out and prosecuting those kind of abuses.

But you can’t make a buck off that so instead we need to go after super-secret racism that is both intangible and invisible, the better to conjure up racism out of thin air and accuse anyone who suggests that maybe we should hesitate to believe in magical thinking of being racists.

Incidentally, I’ve read the “Jones and Okun, 2001” paper they cite and have written about it before. Its the one that racializes “individuality” and “objectivity” as symbols of white supremacy.

While we’re talking about objectivity, permit me to skip ahead a bit in the document. This is something a purportedly thinking human being wrote:

The concept of mathematics being purely objective is unequivocally false, and teaching it is even much less so. Upholding the idea that there are always right and wrong answers perpetuate objectivity as well as fear of open conflict

I guess we have to stop believing that mathematics is at its core probably one of the few things that truly is objective.

Don’t like it? As the document notes up front:

Administrators should examine programs and policies and how white supremacy impacts student outcomes (e.g., tracking, course selection, intervention rosters). In addition, they can hold teachers accountable for completing the activities in this workbook.

You’ll be happy to know we haven’t yet gotten to the really crazy parts.

We see white supremacy culture in the mathematics classroom can show up when:

I’ll pick out the worst offenders. Keep in mind, this is how they believe “white supremacy” shows up in the mathematics classroom:

The focus is on getting the “right” answer.

White supremacy can show up when the focus is on getting the “right” answer.

I wonder if Elon Musk hires white supremacists for his engineering department.

Expectations are not met.

I would like the people designing the bridges I drive over to meet expectations. At a minimum.

Students are required to show their work.

Maybe the teacher can visibilize it.

Grading practices are focused on lack of knowledge.

Let’s stop and consider this for a moment.

In order to embody antiracist math education, teachers should not expect Black, Latinx, and multilingual students to get the “right” answer, meet expectations, show their work, or demonstrate they are not lacking the knowledge they were expected to understand.

To be an antiracist math educator, you must adopt the underlying philosophy of a KKK clansman.

They believe that in order to “design a culturally sustaining math space” you should:

• Cultivate mathematical identity so that everyone can see themselves as mathematicians.

• Adapt homework policies to fit the needs of students of color.

• Recognize and name the mathematical successes of students of color, and teach them to recognize successes in themselves and others.

There are two problems with this.

First, while there are some good suggestions, there’s no need to racialize them. A couple of the other “Strides” have similar suggestions to accommodate the different ways people learn, but by assuming certain attributes are held because of a person’s race is racist. Explicitly so.

“Integrate physical movement in math classes?” Because white people don’t move? Because black people do, or must, or what?

Again, drop that into a KKK pamphlet, “black students can’t sit still,” and you’d be right at home.

Oh, and yes, this is training for middle-school math teachers. Oregon officials want their teachers doing this. They want them to teach their kids like this.

There is plenty of good advice, general advice that has nothing, or should have nothing, to do with race, like this one:

• Use mistakes as opportunities for learning.

Why is this part of a list of “Characteristics of Antiracist Math Educators?” It’s as if they are suggesting that you’re some kind of China Doll if you’re not white.

It may be racist, but at least it’s condescending.

And then there’s this favorite:

White supremacy culture shows up in math classrooms when…

The focus is on getting the “right” answer. Instead…

The concept of mathematics being purely objective is unequivocally false, and teaching it is even much less so. Upholding the idea that there are always right and wrong answers perpetuate objectivity as well as fear of open conflict. Choose problems that have complex, competing, or multiple answers.

• Verbal Example: Come up with at least two answers that might solve this problem.

Again, I would prefer to drive over the bridge where there was only one right answer regarding its load bearing maximums.

Of course, this brings us back to the silly 2+2=5 “controversy.”

Often when people say that, they are referring to practical problems of design, say, “how many lanes should a particular bridge have?” While the ultimate design of the bridge is eventually settled using math, there are more subjective judgments that precede that such as expected traffic, the impact on nearby neighborhoods and the like.

But at the end of the day, when it’s a math problem, there’s one right answer.

Regardless of that argument, it is and always will be racist to assume that because you have African heritage, you should somehow have some genetic predisposition to the “Yoruba of Nigeria who used base 20,” or if you are an indigenous person of South America the fact that “the Mayans conceptualized the number 0 before the first recording of it” will resonate with you in particular.

Further, it is not only racist but condescending to assume that non-whites will have extra difficulty learning traditional Western European mathematical concepts and methods of instruction. Of course they don’t, otherwise we wouldn’t be asked to celebrate their accomplishments (and we should, the movie “Hidden Figures” as one example, is highly recommended).

We should also not forget that “traditional” mathematics as practiced in the United States by all races built the aerospace industry, landed a man on the moon, created nuclear power and the bomb that ended WWII.

Those are human accomplishments, human achievements, and should be celebrated by all humans.

And I’m the crazy one. Well, crazy and racist.

SAD, SAD, SAD, AND VERY DANGEROUS TO THE MENTAL HEALTH OF OUR CHILDREN!

See you next week for more Wisdom Matters!